I was wondering about writing a post on Laura Kreidberg’s new paper on WASP-103b when I noticed that she’d already done it. So let’s just borrow that: 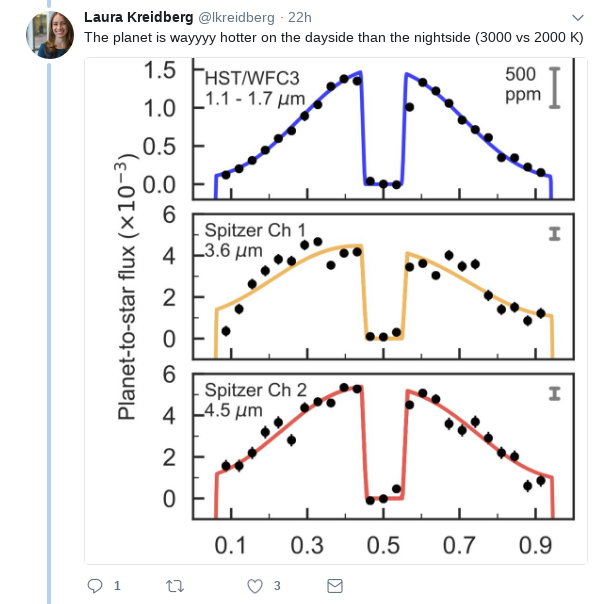 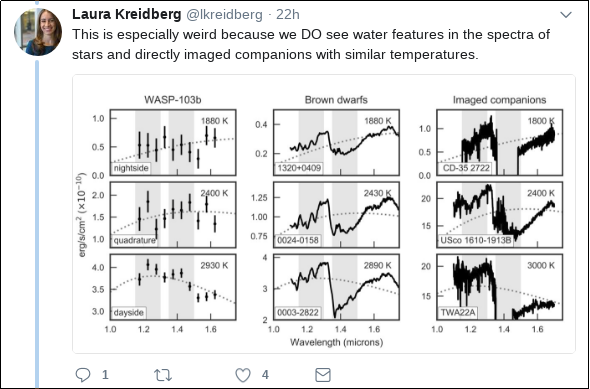 NASA, ESA and JPL have put out press releases on the atmospheric spectrum of WASP-39b. The paper by Hannah Wakeford et al combined Hubble and Spitzer data to produce a comprehensive spectrum with broad spectral coverage.

“Using Hubble and Spitzer, the team has captured the most complete spectrum of an exoplanet’s atmosphere possible with present-day technology. “This spectrum is thus far the most beautiful example we have of what a clear exoplanet atmosphere looks like,” said Wakeford.”

“WASP-39b shows exoplanets can have much different compositions than those of our solar system,” said co-author David Sing of the University of Exeter. “Hopefully, this diversity we see in exoplanets will give us clues in figuring out all the different ways a planet can form and evolve.”

The strongest features in the spectrum are caused by water:

“Although the researchers predicted they’d see water, they were surprised by how much water they found in this “hot Saturn.” Because WASP-39b has so much more water than our famously ringed neighbor, it must have formed differently. The amount of water suggests that the planet actually developed far away from the star, where it was bombarded by a lot of icy material. WASP-39b likely had an interesting evolutionary history as it migrated in, taking an epic journey across its planetary system and perhaps obliterating planetary objects in its path.”

Coverage of the press release includes that by Newsweek, the International Business Times, the Daily Mail and about 30 other websites.

NASA Goddard Space Flight Center and NASA Jet Propulsion Laboratory have put out press releases about observations of WASP-18b with the Hubble Space Telescope and the Spitzer Space Telescope.

The main finding is that WASP-18b, a highly irradiated hot Jupiter in a tight orbit around a hot F-type star, is “wrapped in a smothering stratosphere loaded with carbon monoxide and devoid of water”. 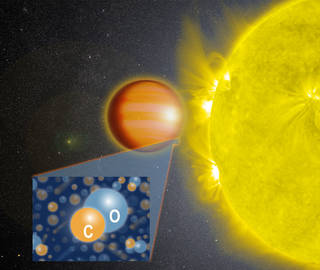 The findings have been reported in many media outlets including: Newsweek, The Independent, The Sun, the Daily Mail, the International Business Times, phys.org, and more than 20 other websites including Forbes magazine, who have produced the following infographic:

WASP-43b is the “hot Jupiter” exoplanet with the orbit closest-in to its star, producing an ultra-short orbital period of only 20 hours. The dayside face is thus strongly heated, making it a prime system for studying exoplanet atmospheres.

Kevin Stevenson et al have pointed NASA’s Spitzer Space Telescope at WASP-43, covering the full orbit of the planet on three different occasions. Spitzer observed the infrared light from the heated face in two bands around 3.6 microns and 4.5 microns.

The three resulting “phase curves” are shown in the figure:

The 4.5-micron data from one visit are shown in red in the lower panel; the 3.6-micron data from the two other visits are in the upper panel. The transit (when the planet passes in front of the star) is at phase 1.0, and drops below the plotted figure. The planet occultation (when it passes behind the star) is at phase 0.5. The sinusoidal variation results from the heated face of the planet facing towards us (near phase 0.5) or away (near phase 1.0).

Intriguingly, the depth of the variation in the 3.6-micron data is clearly different between the two visits. Why is this? Well, Stevenson et al are not sure. One possibility is that the data are not well calibrated and that the difference results from systematic errors in the observations. After all, such observations are pushing the instruments to their very limits, beyond what they had been designed to do (back when no exoplanets were known and such observations were not conceived of).

More intriguingly, the planet might genuinely have been different on the different occasions. The authors report that, in order to model the spectra of the planet as it appears to be during the “blue” Visit 2 in the figure, the night-time face needs to be predominantly cloudy. But, if the clouds cleared, more heat would be let out and the infrared emission would be stronger. That might explain the higher flux during the “yellow” Visit 1. Here on Earth the sky regularly turns from cloudy to clear; is the same happening on WASP-43b?

It is fairly amazing what one can deduce about planets orbiting distant stars. A new paper by Peter Buhler et al reports constraints on the rigidity of the hot-Jupiter exoplanet HAT-P-13b.

The essential data comes from an observation of the occultation of the planet (when it passes behind the host star), as observed in infra-red light by the Spitzer Space Telescope.

If the planet’s orbit were exactly circular the occultation would occur exactly half a cycle after the transit. But this occultation is 20 minutes early. That means that the orbit is slightly elliptical, amounting to an eccentricity of 0.007 +/– 0.001, a small but non-zero value.

Most hot Jupiters are expected to have orbits which have been completely circularised by tidal forces. Thus an eccentric orbit implies either that the planet has only relatively recently moved into that orbit, or that the eccentricity is being maintained by the gravitational effects of a third body.

In this case another planet, HAT-P-13c, a 14-Jupiter-mass planet in a longer 446-day orbit, is thought to be perturbing the close-in hot Jupiter HAT-P-13b.

The extent of the perturbation then tells us about the rigidity of the hot Jupiter. Tidal forces result from the fact that gravity differs across an extended body such as a planet, and how a planet reacts to the tidal stress depends on its rigidity.

The rigidity is parametrised by the “Love number”, and the authors find that the eccentricity of HAT-P-13b’s orbit implies a Love number of 0.3. This in turn implies that the planet likely has a rocky core of about 11 Earth masses, with the rest being an extended gaseous envelope.

A team led by Ian Wong of Caltech have announced observations of the hot Jupiters WASP-19b and HAT-P-7b, looking at infra-red light using the Spitzer Space Telescope. By observing the planets around their entire orbit they detect the transit, caused by the planet passing in front of the host star, the secondary eclipse, when the planet passes behind the star, and the “phase curve” caused by the changing visibility of the heated face of the planet.

The figure shows the infra-red light (“heat”) of the WASP-19 system in two pass bands (3.6 microns and 4.5 microns). The middle panels are expanded to show the phase curve, while the lowest panels show the residuals about a fitted model (the red line).

Such short-period planets are phase-locked by tidal forces, and so always present the same face to the star. Thus redistribution of heat energy requires powerful winds circling the planet.

An interesting plot by Wong et al shows the recirculation in different hot Jupiters against the albedo (the fraction of energy that is reflected).

There appear to be two groups of hot Jupiters: ones with albedos near 0.4, such as WASP-19b, and ones with much lower albedos, such as WASP-14b and WASP-18b. So far there is no simple explanation for this difference.

Further, the recirculation efficiency also appears to be different in different systems. Wong et al suggest that the hot Jupiters experiencing the highest irradiation, such as WASP-19b, are least efficient at redistributing heat, while
longer-period, less-irradiated hot Jupiters such as HD209458b and HD189733b are better at redistribution.

NASA have put out a press release regarding the largest-ever study of hot-Jupiter atmospheres by the Hubble Space Telescope and the Spitzer Space Telescope. Of the ten planets studied, six are WASP discoveries. 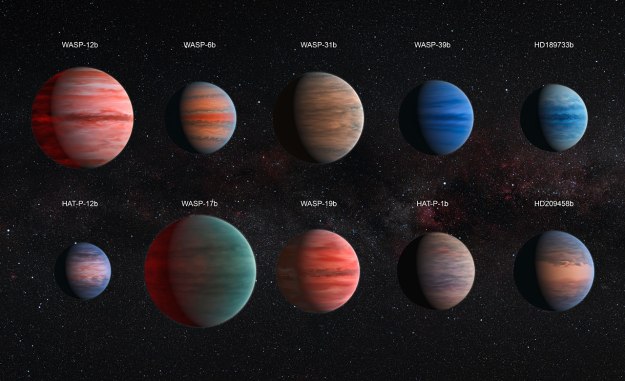 The results, published in Nature, report that hot Jupiters are a diverse group that have atmospheres ranging from clear to cloudy. Strong water absorption lines are seen when the planets have a clear atmosphere, but less so when the atmospheres are dominated by clouds and hazes.

The NASA press release has so far resulted in articles on over 110 news websites worldwide. The paper was lead-authored by David Sing of the University of Exeter.