The Universities of Cambridge and Zurich have put out a press release about a study led by Caroline Dorn. The work discusses how planets form out of proto-planetary discs, and proposes that some planets would form at high temperatures out of condensates rich in Calcium and Aluminium. Their cores could thus effectively be giant rubies or sapphires (different forms of aluminium oxide).

Planets forming at different distances from their star will form at different temperatures, where different minerals will condense out.

Dorn et al suggest that the three planets HD219134 b, 55 Cancri e and WASP-47 e likely to be such objects. “In our calculations we found that these planets have 10-20% lower densities than the Earth”, says Caroline Dorn. The authors suggest that this is because they are rich in Calcium and Aluminium whereas other rocky planets have Iron-rich cores. 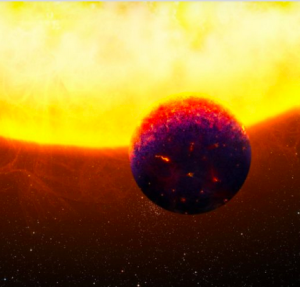 “So, we have found three candidates that belong to a new class of super-Earths with this exotic composition,” says Dorn, adding that: “What is exciting is that these objects are completely different from the majority of Earth-like planets, if they actually exist.”

On-going radial-velocity monitoring of WASP hot Jupiters has shown that some of them have companions, additional Jupiter-mass planets in much wider orbits.

This might be part of the answer as to why there are hot Jupiters at all. Standard planet-formation theory suggests that they must form much further out, where it is colder and where ice can form, enabling bits of pre-planetary debris to clump together. Thus one solution is that gravitational perturbations by third bodies (wide-orbit massive planets or companion stars) push the inner planets into highly eccentric orbits, where tidal capture then circularises them into hot-Jupiter orbits.

But, if this “Kozai effect” is to work, the outer planets need to be in orbits tilted with respect to the orbits of the hot Jupiters. This requires i < 65 degrees, rather than the co-planar i = 90 degrees.

A new paper by Juliette Becker et al reports an analysis of six hot-Jupiter systems orbiting cool stars that have an outer planetary companion. These are WASP-22, WASP-41, WASP-47, WASP-53, HAT-P-4 and HAT-P-13. Though a statistical analysis they show that the outer planets are most likely co-planar, with orbits tilted by no more than 20 degrees. They thus argue that Kozai-driven high-eccentricity migration is not the dominant way of forming hot Jupiters.

In the discovery paper the exoplanet WASP-47b was introduced to the world with the description: “With an orbital period of 4.16 d, a mass of 1.14 MJup and a radius of 1.15 RJup, WASP-47b is an entirely typical hot Jupiter”.

And it did appear to be entirely typical until Juliette Becker et al looked at K2 lightcurves and found two more planets, a super-Earth orbiting inside the hot Jupiter (WASP-47e in a 0.79-d orbit) and a Neptune orbiting just outside it (WASP-47d in a 9-d orbit). Around the same time Neveu-VanMalle et al announced long-term monitoring showing another Jupiter-mass planet (WASP-47c), this one in a much wider orbit of 580 days. Thus WASP-47 was shown to host a whole exoplanetary system, one that is so-far unique.

Since then WASP-47 has been observed intensively in order to measure the planet masses and investigate the dynamics of the exoplanetary system. The state of play is now reported by Andrew Vanderburg et al. The planets’ host star is tugged around by the gravitational pull of the orbiting planets, leading to the following cyclical variations in the observed radial velocities:

Combining all the information, Vanderburg et al deduce that the innermost “super-Earth”, WASP-47e, is not dense enough to be made only of rock. Instead it likely has a liquid or gaseous envelope (possibly water or steam) surrounding an Earth-like core. That is unlike other ultra-short-period super-Earths which appear to be fully rocky.

From modelling the dynamical history of the system Vanderburg et al also deduce that the outermost planet, WASP-47c, is likely in an orbit that is in the same plane as those of the inner planets. If this were not the case then the system would not be stable. Thus they conclude that the likelihood that WASP-47c also transits its star, as seen from Earth, is relatively high, which should motivate a campaign to look for those transits.

The planetary system WASP-47 is highly popular at the moment, following the K2 discovery of two more transiting exoplanets, and the radial-velocity detection of a longer-period outer planet, in addition to the orginal hot Jupiter, WASP-47b.

But here’s an additional curiosity: WASP-47 is so close to the plane of our own solar system, aligned to better than 0.26 degrees, that Earth would be seen to transit from WASP-47!

Christopher Burke, of the SETI Institute, has produced this graphic of an Earth transit as seen from the location of WASP-47.:

Of course it is only speculation that there are inhabitants of WASP-47, though, with four planets known so far in the system, there might be some planet or moon that is inhabitable. If they had detected Earth, they might then point their biggest telescope at the next transit, and perhaps find free oxygen in Earth’s atmosphere, and so deduce that Earth has life.

Chris Burke suggests that WASP-47 is a very good SETI target; they might already know about us!

Since the discovery by K2 of two more transiting exoplanets orbiting WASP-47, plus a fourth planet at a much longer orbital period, this system has shot to the top of the priority lists. A team led by Fei Dai of MIT have thus pointed the 6.5-m Magellan/Clay telescope at WASP-47 to try to measure the radial-velocity signal, and hence the masses, of the two planets found by K2.

The figure shows the complex radial-velocity motion in a multiple-planet system. The blue curve is the radial-velocity motion caused by the 4.2-day-period hot-Jupiter WASP-47b, as originally found by the WASP project. The yellow curve is caused by the 0.79-day planet WASP-47e, the green curve by the 9-day planet WASP-47d, and the purple by the much-longer-period WASP-47c. The red line is then the sum of all the planets and the black dots are the measurements by Dai et al.

By fitting all of the data, Dai et al show that the innermost planet, WASP-47e, has a mass of 12 +/- 4 Earths, while the 9-day planet WASP-47c has a mass of 10 +/- 8 Earths. Both results are in line with previous mass estimates from transit-timing variations, which helps to validate mass measurements by both the RV and the TTV techniques.

As NASA’s Kepler mission covers fields in the ecliptic previously surveyed by WASP, it is obtaining photometry of unprecedented quality on some WASP planets. The big news this week is the discovery of two more transiting planets in the WASP-47 system.

WASP-47 had seemed to be a relatively routine hot-Jupiter system with the discovery of a Jupiter-sized planet in a 4-day orbit, reported in a batch of transiting planets from WASP-South by Hellier et al 2012.

But WASP-47 is anything but routine. Now Becker et al have announced that the Kepler K2 lightcurves show two more transiting planets: a super-Earth planet in an orbit of only 0.79 days, and a Neptune-sized planet in an orbit of 9.0 days. Being much smaller, these planets cause transits that are too shallow to have been seen in the original WASP data.

Such “transit-timing variations” or TTVs lead to estimates of the planetary masses. Becker et al find that the hot Jupiter has a mass of 340 Earths (consistent with the mass of 360 Earths originally reported by Hellier et al from radial-velocity measurements), while the Neptune has a mass of 9 Earths. The super-Earth must be less massive than that, but current timing measurements are not sensitive enough to say more.

As if three planets were not enough, there is a probable fourth planet orbiting WASP-47. The Geneva Observatory group routinely monitor known WASP systems, taking radial-velocity measurements over years, to look for longer-period planets. Marion Neveu-VanMalle and colleagues have recently reported the detection of another Jupiter-mass planet orbiting WASP-47, this time in a much wider orbit of 571 days.

The WASP-47 system has now become hugely interesting for understanding exoplanets, and will trigger many additional observations of the system. For example, being bright enough to allow good radial-velocity data, it will provide a much-needed check that the mass estimates from TTVs match those from the more traditional radial-velocity technique.

The system will also be of strong interest to theorists, who will want to understand the formation and origin of a planetary system with this architecture. One immediate consequence is that it shows that a hot Jupiter can arise by inward migration through the proto-planetary disk, without destroying all other planets in its path.