If, during a transit of its star, an exoplanet crosses a star spot, it will be covering a region that is dimmer than the rest of the star. Since less light will be being occulted, we will see a small increase or “bump” in the transit profile. WASP-85 was recently observed by the K2 mission, getting sufficiently high-quality photometry that it could reveal such starspot `bumps”.

Here is the transit proflle, from a paper by Teo Močnik et al, which contains all the K2 data folded in: 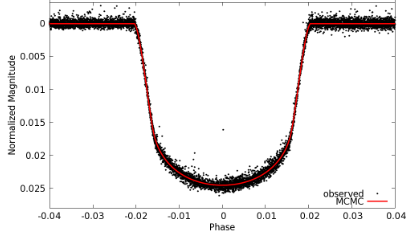 Teo Močnik then subtracted the overall transit profile, thus showing the departures from the average behaviour, and produced a plot of each transit:

The vertical dashed lines show the regions in transit. The lightcurve bumps circled in red are starspots being occulted. (Blue arrows are times when K2 fired its thrusters, which can cause a feature in the lightcurve.)

The interesting question is whether a bump recurs in the next transit, but shifted later in phase, as it would if the same starspot is being occulted again. This would happen if the planet’s orbit is aligned with the stellar rotation. In that case, as the star rotates, the spot moves along the line of transit, to be occulted again next transit.

An illustration of a planet occulting a star spot when the planet’s orbit and the star’s rotation are aligned. Graphic by Cristina Sanchis Ojeda

The result is that we think that starspots do repeat, shown by the red linking lines in the above figure. This shows that the planet’s orbit is aligned, and it also allows us to estimate the rotational period of the star.

The planetary system WASP-47 is highly popular at the moment, following the K2 discovery of two more transiting exoplanets, and the radial-velocity detection of a longer-period outer planet, in addition to the orginal hot Jupiter, WASP-47b.

But here’s an additional curiosity: WASP-47 is so close to the plane of our own solar system, aligned to better than 0.26 degrees, that Earth would be seen to transit from WASP-47!

Christopher Burke, of the SETI Institute, has produced this graphic of an Earth transit as seen from the location of WASP-47.:

Of course it is only speculation that there are inhabitants of WASP-47, though, with four planets known so far in the system, there might be some planet or moon that is inhabitable. If they had detected Earth, they might then point their biggest telescope at the next transit, and perhaps find free oxygen in Earth’s atmosphere, and so deduce that Earth has life.

Chris Burke suggests that WASP-47 is a very good SETI target; they might already know about us!

Hot Jupiter planets are in tight orbits around their host star, and since that star will not be perfectly spherical, small gravitational perturbations should cause the orbit to precess. A team led by Marshall Johnson has now shown that this is indeed happening in WASP-33.

WASP-33 is a very hot, rapidly rotating A-type star. This means the planet is only detected by the “shadow” that it causes in the profiles of the spectral lines of the star during transit.

Since the star is rotating the spectral lines will be broadened by the Doppler effect, with photons from the approaching limb being blue-shifted and photons from the receding limb being red-shifted. As the planet transits the star, it blocks the light from one small region of the star’s surface. This removes the photons that are Doppler shifted with the velocity of that part of the star’s surface.

The trace of the planet across the star’s surface during transit can therefore be seen as a stripe moving in velocity across the profile of the star’s spectral lines. This is seen in these false-colour images of the spectral line of WASP-33, taking during two transits, six years apart:

This observation validates the theory that the orbit should be precessing, and is only the second detection of nodal precession in an exoplanet orbiting a single star, after the example of Kepler-13 Ab.

A 15-yr-old schoolboy has discovered a new planet orbiting a star 1000 light years away in our galaxy. Tom Wagg was doing work-experience at Keele University when he spotted the planet by finding a tiny dip in the light of a star as a planet passed in front of it.

“I’m hugely excited to have found a new planet, and I’m very impressed that we can find them so far away”, says Tom, now aged 17. It has taken two years of further observations to prove that Tom’s discovery really is a planet.

Tom found the planet by looking at data collected by the WASP project, which surveys the night skies monitoring millions of stars to look for the tell-tale tiny dips (transits) caused by planets passing in front of their host star.

Tom’s planet has been given the catalogue number WASP-142b, being the 142nd discovery by the WASP collaboration. It is in the Southern constellation of Hydra. While astronomers worldwide have now found over 1000 extra-solar planets, Tom is possibly the youngest ever to have done so.

“The WASP software was impressive, enabling me to search through hundreds of different stars, looking for ones that have a planet”, says Tom. The planet is the same size as Jupiter, but orbits its star in only 2 days. With such a short orbital period the transits occur frequently, making such planets much easier to find.

While the planet is much too far away to see directly, an artist’s impression shows how it might look. The hemisphere facing the star is hot, blasted by the irradiation from the star, while the other hemisphere is much cooler.

Tom, a pupil at Newcastle-under-Lyme School who has always been keen on science, asked for the work-experience week after learning that Keele University had a research group studying extra-solar planets.

“Tom is keen to learn about science, so it was easy to train him to look for planets”, says Professor Coel Hellier, who leads the WASP project at Keele. Tom has since achieved 12 GCSEs, all at A*, and wants to study physics at university.

The planet is one of a class of “hot Jupiter” planets, which — unlike the planets in our own Solar System — have very tight orbits close to their stars. They are thought to have migrated inwards through interactions with another planet. Thus it is likely that Tom’s planet is not the only planet orbiting that star.

An artist’s impression of the planet WASP-142b, depicted as seen from a hypothetical moon.
(Credit: David A. Hardy. http://www.astroart.org/)    Click for high-res version (1.5MB)

2014 is proving to be the WASP project’s most successful year yet for the publication of transiting exoplanets. With two months to go before the end of the year, there are already 17 new planets published in 2014 in refereed journals. 12 more planets have been announced on the arXiv preprint server, though many of those will likely appear with a 2015 publication date.

We are currently finding transiting exoplanets at a rate of about 30 a year (WASP-117 is the highest number published, though we have currently got as far as WASP-134). This results from improvements in data quality owing to adding multiple years of observation. Further, the combination of WASP-South with the TRAPPIST photometer and the Euler/CORALIE spectrograph is proving to be a highly effective team. The process involves a lot of telescope time and hard work — only 1 in 10 of candidates followed up proves to be a planet — but the reward is the strong worldwide interest in studying WASP planets.

NASA’s Kepler planet-hunting mission is entering the “K2” phase of its life. The loss of reaction wheels and thus pointing stability mean that it couldn’t continue looking at the original Kepler field, but Kepler engineers have worked out that it can point to fields in the ecliptic by using the pressure of the Sun’s light to stablise the spacecraft.

In engineering observations to test his concept Kepler pointed at WASP-28b, a hot-Jupiter planet previously found by WASP-South. The lightcurve from a short test in Jan 2014 shows that Kepler is working well and can still detect planets.

Several more WASP planets, incuding WASP-47b, WASP-67b, WASP-75b and WASP-85b are in planned Kepler-2 fields, promising high-quality Kepler lightcurves to really nail down the masses and radii of these planets.