WASP-107b is a hugely bloated planet, with a mass of only two Neptunes, but a radius near that of Jupiter, making it one of the puffiest planets known. As such it has been heavily studied, and indeed was the exoplanet showing the first detection of helium.

Long-term monitoring of the WASP-107 system with the Keck telescope has now revealed a companion planet, WASP-107c, as announced by Caroline Piaulet et al. 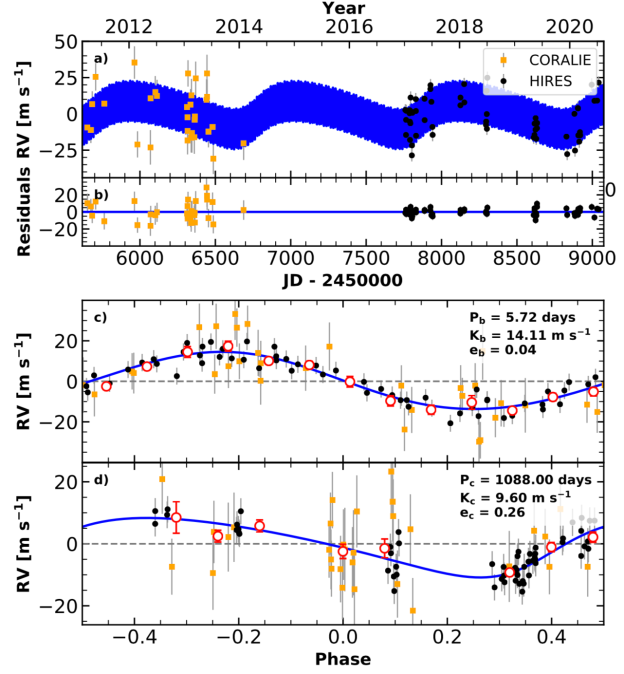 The new planet is in a much wider orbit, with a period of 1088 days and a high eccentricity of e = 0.26. It likely does not transit, and has a mass of perhaps a third that of Jupiter. 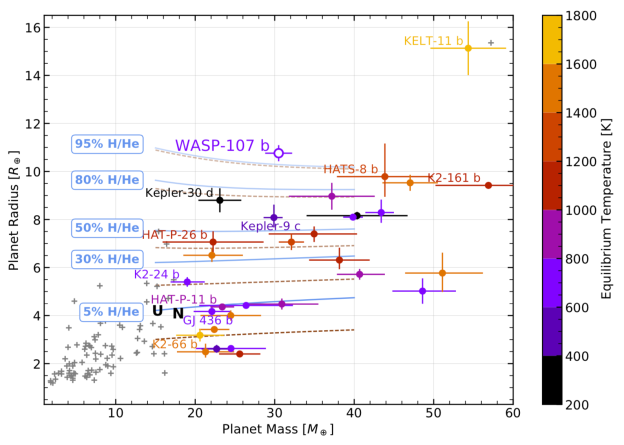 The authors conclude that, “Looking ahead, WASP-107b will be a keystone planet to understand the physics of gas envelope accretion”, starting with a planned observation with the soon-to-be-launched JWST.

Transiting a bright star, the “Neptune desert” planet HD 219666b was one of the more important early discoveries from the TESS survey. With a depth of only 0.17 per cent, the transits would be a challenge for any ground-based transit survey.

Nevertheless, we think we’ve found them in WASP-South lightcurves dating back to 2010. Here they are:

The orange lines show times of transit, as found by the WASP transit-detection algorithms. The shallow dips seem to be real, since they align both in period and in phase with the dips seen in the TESS lightcurve. The output from the WASP search algorithm is not itself that convincing:

With a depth of 0.17 per cent, the transits of HD 219666b are the shallowest that WASP has detected.

The benefit of looking for such pre-detections of TESS planets is that we can then produce a transit ephemeris based on data spanning a baseline of 8 years, rather than the 20 days spanned by the TESS transits. This means we can predict future transits to an accuracy of minutes, instead of hours, which is highly useful for future observations. Hence this WASP-South detection of HD 219666b transits is well worth an AAS Research Note.