Even though WASP has found nearly 200 planets we are still announcing systems that are unlike any previous ones. WASP-148 is an example, as described in the discovery paper by Guillaume Hébrard et al.

WASP first detected transits of the hot Jupiter WASP-148b in an 8.8-day orbit. Spectroscopic observations with OHP/SOPHIE, aimed at measuring the planet’s mass, then found that there was also a second massive planet in a longer, 35-day orbit:

The orbits of both planets are eccentric, likely because they are perturbing each other by their gravitational attraction. Further, the gravitational perturbations mean that the transits of the inner planet vary in time by 15 mins. 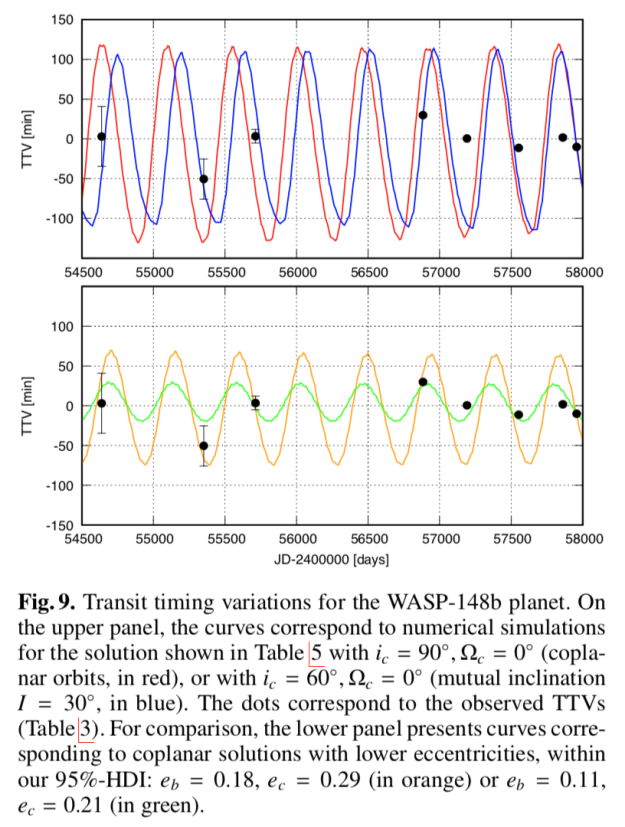 We don’t yet know whether the outer planet, WASP-148c, also transits (since its longer period means that there are gaps in WASP’s coverage of its orbit), but this patch of sky is currently being observed by the TESS satellite. The space-based photometry from TESS will be good enough to detect any transits of WASP-148c, to map out transit-timing variations, and to look for additional planets in the system that are too low mass to have been detected in the radial-velocity data. WASP-148 is thus an important system for studying an unusual planetary-system architecture, with two massive planets in relatively close orbits in resonance with each other.

With the TESS satellite observing most of the WASP planets as it surveys the sky, one can use the space-based data quality to look for “transit timing variations” in the WASP planet transits. Such TTVs — slight changes in the time of recurrence of a transit — can be caused by the gravitational perturbation of other planets in the system, and thus can reveal the presence of extra planets even when they themselves do not transit.

A new paper by Kyle Pearson, of the University of Arizona, reports evidence for TTVs in the TESS light-curves of WASP-18 and WASP-126.

Here is the TESS light-curve of WASP-18, showing the transits of the known planet WASP-18b:

And here are possible changes in the transit times, varying systematically with a 2.1-day period (red line):

Here now is the TESS light-curve of WASP-126, showing transits of WASP-126b:

And here are possible TTVs varying systematically with a period of 7.7 days (red line):

The evidence is not yet sufficiently water-tight to be sure of the existence of the extra planets, without adding in further data, but this study points to lots of similar work using TESS data as it continues its multi-year survey.

As TESS continues its all-sky survey it will produce high-quality data containing lots of transits for all the WASP planets. This is especially so for planets near the ecliptic poles, which TESS will observe over many sectors. With TESS Sector 4 data recently released, here are some plots borrowed from David Kipping on Twitter.

The lower plots show the variations in transit timing (O–C is the difference between the observed timing and the timing calculated from an ephemeris).

These plots seem to show something that I’ve suspected for a while, namely that there are correlated deviations in the transit timings, meaning that if one O–C value is slightly early (or late) then the next one is more likely to be the same. Such deviations can also be larger than expected given the errors (the quoted chi-squared value for WASP-100b of 44 for 32 degrees of freedom tells us that the error bars don’t fully account for the variations).

This must be the result of stellar activity, magnetic variations on the surface of the star such as star-spots and faculae. Any deviation from a smooth stellar profile can then alter the transit profile.

Properly accounting for such effects will be important for two sorts of study. The first is looking for “transit-timing variations”, changes in the transit time of a planet caused by variations in its orbit owing to the gravitational perturbations of another planet. The second is looking for long-term changes in the orbital period, such as the inward-spiral decay of the orbit predicted to be caused by tidal interactions of the planet and its host star. The literature contains marginal claims of the latter effect that might be better explained as the effect of magnetic activity of the host star.

Since the discovery by K2 of two more transiting exoplanets orbiting WASP-47, plus a fourth planet at a much longer orbital period, this system has shot to the top of the priority lists. A team led by Fei Dai of MIT have thus pointed the 6.5-m Magellan/Clay telescope at WASP-47 to try to measure the radial-velocity signal, and hence the masses, of the two planets found by K2. 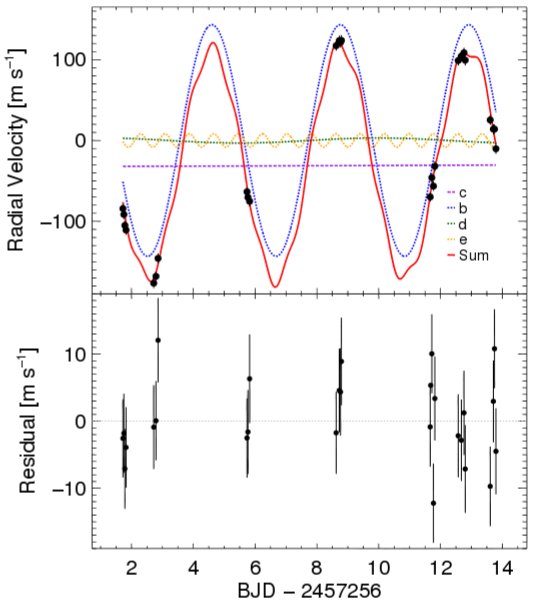 The figure shows the complex radial-velocity motion in a multiple-planet system. The blue curve is the radial-velocity motion caused by the 4.2-day-period hot-Jupiter WASP-47b, as originally found by the WASP project. The yellow curve is caused by the 0.79-day planet WASP-47e, the green curve by the 9-day planet WASP-47d, and the purple by the much-longer-period WASP-47c. The red line is then the sum of all the planets and the black dots are the measurements by Dai et al.

By fitting all of the data, Dai et al show that the innermost planet, WASP-47e, has a mass of 12 +/- 4 Earths, while the 9-day planet WASP-47c has a mass of 10 +/- 8 Earths. Both results are in line with previous mass estimates from transit-timing variations, which helps to validate mass measurements by both the RV and the TTV techniques.

As NASA’s Kepler mission covers fields in the ecliptic previously surveyed by WASP, it is obtaining photometry of unprecedented quality on some WASP planets. The big news this week is the discovery of two more transiting planets in the WASP-47 system.

WASP-47 had seemed to be a relatively routine hot-Jupiter system with the discovery of a Jupiter-sized planet in a 4-day orbit, reported in a batch of transiting planets from WASP-South by Hellier et al 2012.

But WASP-47 is anything but routine. Now Becker et al have announced that the Kepler K2 lightcurves show two more transiting planets: a super-Earth planet in an orbit of only 0.79 days, and a Neptune-sized planet in an orbit of 9.0 days. Being much smaller, these planets cause transits that are too shallow to have been seen in the original WASP data.

Such “transit-timing variations” or TTVs lead to estimates of the planetary masses. Becker et al find that the hot Jupiter has a mass of 340 Earths (consistent with the mass of 360 Earths originally reported by Hellier et al from radial-velocity measurements), while the Neptune has a mass of 9 Earths. The super-Earth must be less massive than that, but current timing measurements are not sensitive enough to say more.

As if three planets were not enough, there is a probable fourth planet orbiting WASP-47. The Geneva Observatory group routinely monitor known WASP systems, taking radial-velocity measurements over years, to look for longer-period planets. Marion Neveu-VanMalle and colleagues have recently reported the detection of another Jupiter-mass planet orbiting WASP-47, this time in a much wider orbit of 571 days.

The WASP-47 system has now become hugely interesting for understanding exoplanets, and will trigger many additional observations of the system. For example, being bright enough to allow good radial-velocity data, it will provide a much-needed check that the mass estimates from TTVs match those from the more traditional radial-velocity technique.

The system will also be of strong interest to theorists, who will want to understand the formation and origin of a planetary system with this architecture. One immediate consequence is that it shows that a hot Jupiter can arise by inward migration through the proto-planetary disk, without destroying all other planets in its path.