Our recent paper on WASP-104b has been picked up as a Research Highlight by Nature. We reproduce it here: 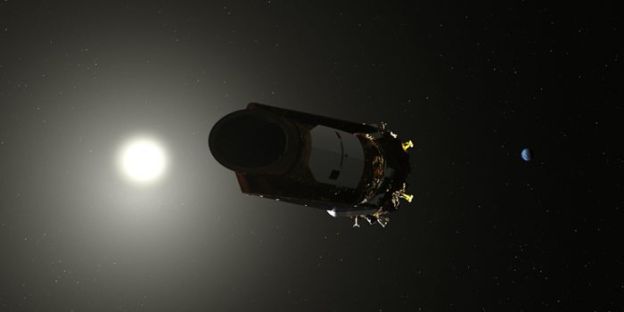 “Astronomers led by Teo Močnik at Keele University, UK, used NASA’s Kepler telescope to study a star called WASP-104, which lies roughly 144 parsecs from Earth in the constellation Leo. Earlier observations had documented a dimming of WASP-104’s light every 1.76 days, indicating that a planet was regularly crossing the star’s face. But Močnik’s team could not detect starlight reflecting off the planet, as scientists usually expect after discovering a new world. That led the researchers to conclude that the planet is nearly pure black in colour. The planet’s darkness could help scientists to test their ideas about exoplanetary atmospheres, such as how clouds might form on a world that reflects so little light.”

The paper, published in Astronomical Journal, is here.

Hot Jupiter WASP-104b was observed in Campaign 14 of the Kepler K2 mission, leading to superb-quality photometry covering 45 orbital cycles of the planet.

Keele graduate student Teo Močnik has analysed the data and concluded that WASP-104b is one of the darkest exoplanets known, reflecting less than 3% of the light from its star.

The conclusion comes from interpreting the “phase curve” produced when the photometry is folded on the planet’s orbital period. Variations in the light are expected to come from the transit and occultation (when the planet passes in front of and behind the star, respectively), from the gravitational distortion of the host star caused by the close-in planet, and from the reflection of starlight. 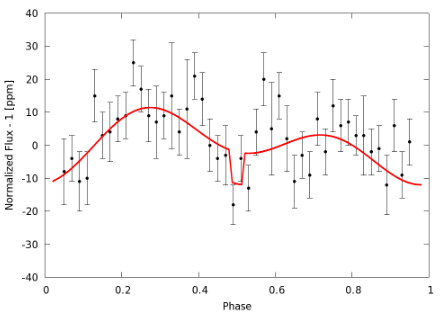 The phase curve of WASP-104b, as observed by K2, fitted with a red-line model.

The low albedo of the planet is a surprise, but might indicate the absence of clouds (which can be highly reflective) or the presence of ions such as sodium and potassium that absorb light.

The story of WASP-104b was reported by New Scientist, and that then led to articles in Science Alert, Metro, the Daily Mail, Newsweek, the International Business Times, Tech Times and other locations.