Press Release (in coordination with Nature and Hubble/ESA): Astronomers using the NASA/ESA Hubble Space Telescope have detected helium in the atmosphere of the exoplanet WASP-107b. This is the first time that this element has been detected in the atmosphere of a planet outside the Solar System. The discovery demonstrates a new method for studying exoplanet atmospheres.

An international team, led by Jessica Spake of the University of Exeter, has discovered helium in the atmosphere of the exoplanet WASP-107b. The discovery was made with the Wide Field Camera 3 on the Hubble Space Telescope.

“Helium is the second-most common element in the Universe after hydrogen”, explains Jessica Spake. “It is also one of the main constituents of the planets Jupiter and Saturn in our Solar System. However, until now helium has never been detected in an exoplanet.”

WASP-107b (the 107th exoplanet discovered by the UK-led Wide Angle Search for Planets, “WASP”) was discovered in 2017 by a team led by Professor Coel Hellier of Keele University.

The team found that WASP-107b is a very low-density planet, being so puffed up and bloated that the atmosphere might be boiling off the planet under the irradiation of its host star.

“As soon as we found WASP-107b we realised it was ideal for studying the atmosphere of an exoplanet” remarks Keele astronomer David Anderson, who wrote the paper announcing WASP-107b. 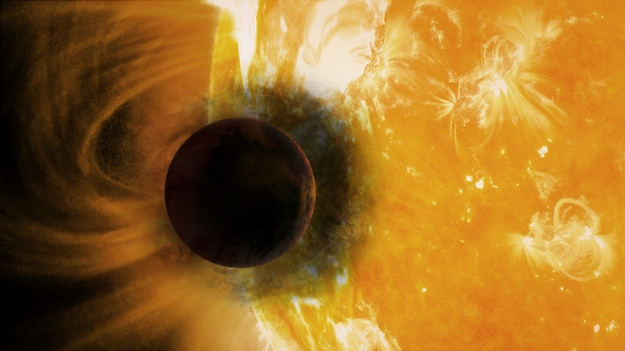 Artist’s impression of the exoplanet WASP-107b showing the atmosphere boiling off under the fierce irradiation of its star. Image credit: EngineHouseVFX

Jessica Spake decided to point Hubble at WASP-107b, and, by detecting the spectral signature of irradiated helium atoms, proved that the atmosphere is indeed boiling off into space. While it had long been thought that helium would be abundant in exoplanet atmospheres, searches for it had previously been unsuccessful.

David Sing, who leads the Exeter team, says that: “Our new method, along with future telescopes, such as the James Webb Space Telescope, will allow us to analyse atmospheres of exoplanets in far greater detail than ever before.”

Jessica Spake continues. “We know that there is helium in the Earth’s upper atmosphere and this new technique may help us to detect atmospheres around Earth-sized exoplanets.”

The study was published in the paper “Helium in the eroding atmosphere of an exoplanet”, published in Nature.

Note: Dozens of websites have covered the story, including Newsweek, The Independent, the International Business Times, and others.