Aerosols make the planet’s atmosphere hazy, an effect which is more pronounced at the blue end of the spectrum. Here is the spectrum of hot-Jupiter exoplanet WASP-69b, combining Hubble Space Telescope data from several observations. 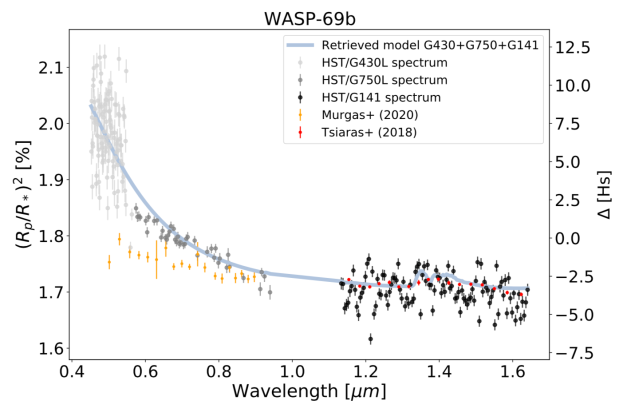 The steeply rising spectrum (the y-axis shows effective planet size, with a larger size indicating more atmospheric absorption) is modelled (blue line) by including haze from aerosol scattering. The aerosols are found to extend from millibar pressures to microbar pressures.

The authors don’t yet know the composition of the aerosols, but suggest possibilities including hydrocarbons or magnesium silicate condensates. Overall they conclude that: “These results are consistent with theoretical expectations based on microphysics of the aerosol particles that have suggested haze can exist at microbar pressures in exoplanet atmospheres”.