Here’s a plot of the spectrum of the ultra-hot-Jupiter WASP-121b. It’s from a new paper led by Jamie Wilson of Queen’s University Belfast.

The plot compares results from different instruments at different times. In particular the green points are from the ground-based Gemini/GMOS instrument, and are fitted by the model in red. The light-blue points (and fitted purple model) are from the space-based HST/STIS instrument. 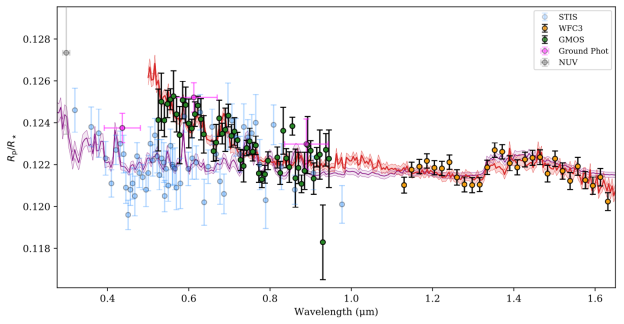 Clearly the two datasets are not consistent. One possible explanation would involve instrumental systematics that are not properly accounted for in the analysis. Such analyses are right at the edge of what can be done, pushing the instruments beyond their designed capabilities, and reducing the datasets to a properly calibrated spectrum is a demanding task.

The other possible explanation is that WASP-121b really was different on the two occasions, and that “weather” on the planet is affecting its atmosphere. Just as Earth’s atmosphere can change from clear to cloudy, we expect that the same could be occurring on exoplanets.

The authors say that: “WASP-121b is expected to have wind speeds of 7 km/s and a pressure–temperature profile which lies near the condensation curves of a number of species”, and thus: “It is therefore perhaps not all that surprising that small temperature fluctuations could result in significant spatial and temporal variations in atmospheric constituents and could lead to measurable variations in transit measurements.”