WASP-166b, newly announced on arXiv, is a planet we’ve been following for a while. As we routinely do, we measure the mass of the planet from how much its gravity tugs the host star around, and we measure that from the Doppler shift of its spectrum. The “radial velocity” data for WASP-166, however, didn’t neatly fit the expected orbital motion (the fitted line in the figure), showing, in addition, deviations from the model. 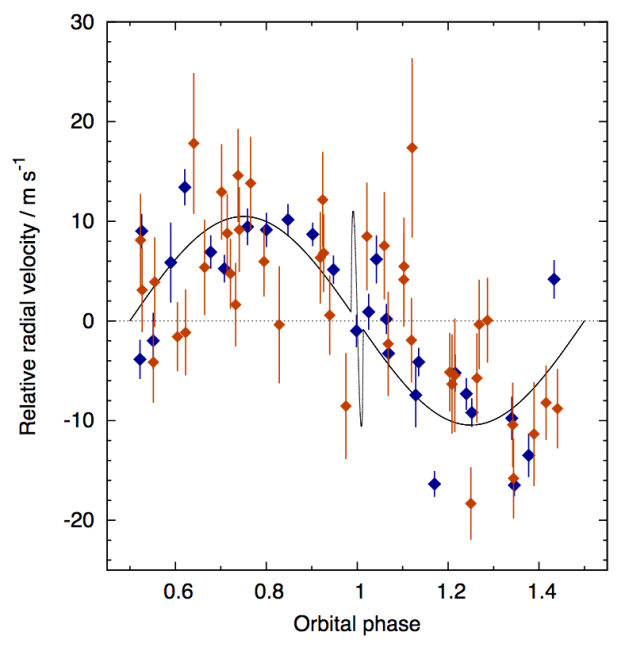 It took us a while to understand this. One suggestion was that it was caused by a second planet also tugging the host star around. So we obtained more data, hoping to trace out the orbit of the second planet, only to find that that didn’t properly explain the data. Eventually we attributed the deviations to magnetic activity on the host star. If we plot the deviations as a function of time we obtain: 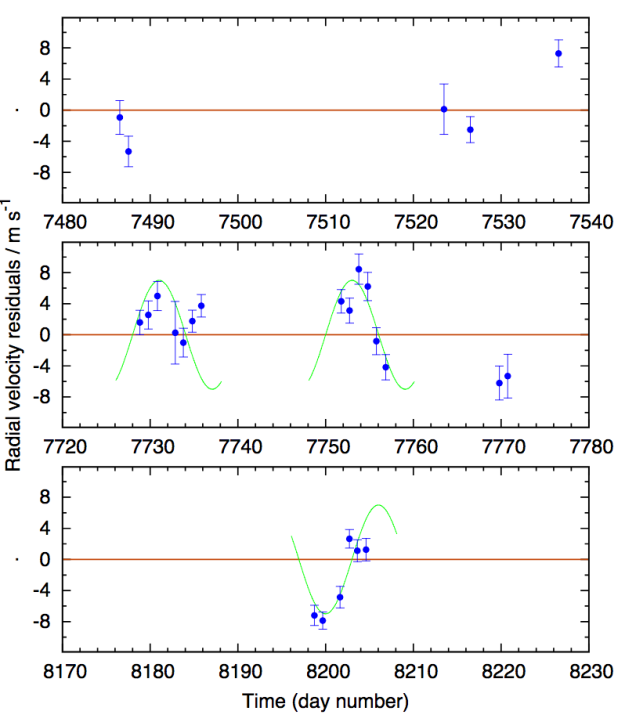 The green sinusoidal lines are at the 12-day period at which we think the star rotates, as judged from the width of the spectral lines (which tells us how fast the star rotates). This suggests that the radial velocity varies with the rotational period of the star, and thus that the deviations are caused by “faculae”, magnetically active patches on the surface of the star.

WASP-166b is a low-mass planet, only a tenth that of Jupiter and twice that of Neptune. It has a large radius, however, at 63% of that of Jupiter. Thus it is a bloated planet with a low surface gravity.

Such planets are rare, especially in short-period orbits around fairly hot stars, as is WASP-166b. Indeed the lack of such planets is called the “Neptune desert”.

The explanation is thought to involve irradiation, heat from the host star evaporating off the atmosphere of the planet. Jupiter-mass planets can resist this because they have a lot of mass and thus gravity to keep hold of the atmosphere. Similarly, smaller, compact planets can survive because they are rocky and denser. But, in the middle, gaseous Neptune-mass planets find it hard to survive when subjected to high irradiation.

Another notable fact about WASP-166b is that it transits a host star with a bright visual magnitude of V = 9.4. The combination of a fluffy atmosphere and bright host star make it one of the best targets for studying the atmosphere by “transmission spectroscopy”, as can be obtained when the planet is projected against the stellar disc during transit. The plot compares the expected atmospheric signal of WASP-166b to the other best targets already known.