A team led by Brett Addison has been pointing the Anglo-Australian Telescope at WASP planets, trying to discern whether the planet’s orbit is aligned with the star’s spin axis.

The rotation of the star means that one limb is approaching us, and so is blue-shifted, while the other limb is receding, and so is red-shifted. The planet can occult blue-shifted light (making a spectral line redder) and then red-shifted light. This is called the Rossiter–McLaughlin (or R–M) effect, and allows us to deduce the path of a transiting planet across the face of its star. 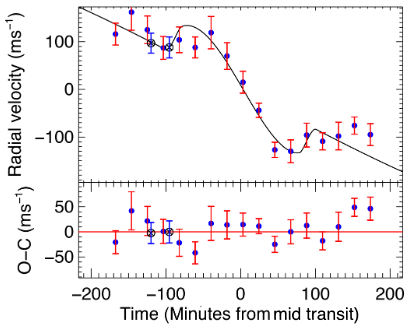 All three planets appear to have orbital axes aligned with the star’s spin axis. The authors discuss the mechanisms and timescales by which orbits get “damped” by tidal effects and so become aligned with their star.