Characterising the atmospheres of exoplanets is a rapidly growing field that is set to increase in importance even more with the forthcoming launch of JWST. WASP planets are prime targets for such work since they transit relatively bright stars. Comparing spectra in and out of transit then gives a transmission spectrum of the planet’s atmosphere. 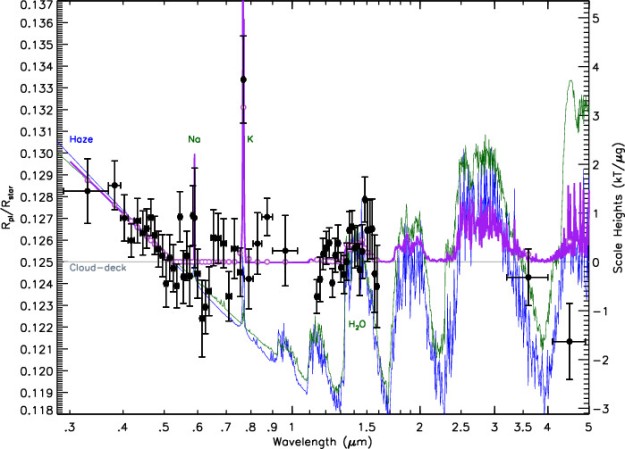 Notable features include the presence of potassium absorption (the peak labelled K) and the fact that this is stronger than sodium (Na) absorption. The absence of many of the broad features in the plotted models implies a “cloud deck” that results in few spectral features. Also seen is a “Rayleigh scattering” slope implying small atmospheric particles floating above the cloud layer.

WASP-31b is a planet of 0.5 Jupiter masses that is bloated up to 1.5 Jupiter radii. This gives it a large atmospheric scale height that makes it a good target for transmission spectroscopy, since the fluffier atmosphere covers a larger fraction of the star during transit.

WASP-31b was discovered in 2010 by the WASP-South team led by David Anderson.